By patchmac on July 14, 2012 in Subtle Energies in Agriculture 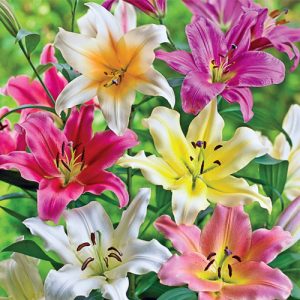 Greetings of this Harvest Tide…it does indeed seem to be a year of insight and new opportunity for creativity!

I wanted to share a report from this season, although still unfolding, from a small farm client in northern Vermont. They are working this year to grow rare varieties of lilies as well as experimenting with rice.

His Farm and our work there has appeared in previous blog postings – he constructed a small size “sacred germination space” on the crossing of two beneficial dragon lines over which we had sited his greenhouse.

Germination rates and growth over the first two weeks are extraordinarily successful. He has found that after two weeks of the intense germination atmosphere, his plants need to come out into a more gently and less intense energetic environment in order to continue with their structural development.

It is of great interest to be able to observe closely such subtle energy effects on the living systems around them, ourselves, and our own businesses included – and to progressively learn to apply these simple technologies with more awareness, understanding, and simple benefit.

What’s possible where you live?

Well, I am just back from the farmer’s market and the stories one hears of the pressures from pests, rabbits (out of control population surge this year), deer, but most of all from thrips and other bugs…

Farmers are being absolutely overwhelmed.

I am growing lily for instance and today at the farmer’s market the same question over and over… “how can you grow lilies like these?”

They were flawless, and I have had no lily beetle. All lily growers and home growers I have spoken with have stopped growing them because of this little red beetle. Along with the beetle, the rabbits and moles and voles are making me the only game in town. It was quite nice to be such a celebrity. “How do you do it?”

Also, the florists wonder how my flowers last so much longer in the intense heat we have been having and, as you know, I water 5 acres with a garden hose, meaning I have very drought tolerant plants which usually soak up water. But, mine are able to last even in a sandy loamy soil and little or no rainfall for most of May and June.

The flower stalks, say the florists, have been shorter this year than last, yet even my narcissus, newly-planted, are showing an ability to grow longer, last longer, and put up with a ton of pressure from inclement weather and pests.

I am also seeing in the greenhouse, which is extremely hot this time of year, that flowers are able to withstand temperatures which would kill, according to the texts, 126 degrees F, on a normal basis, as I have no side flaps for my houses and the end-walls are fixed. Granted I do have a fan, but often do not get to watering for a day, and things are bone dry.

Finally, the ability of the seed germination chamber area to root cuttings, and grow bulbs from scales is proving to be a godsend, as the lily breeding experiments I am conducting with a lily breeder in Norway confirms that things go better with the chamber around, for me at least. And, should we find that the crosses we make are fertile, there will be another chapter to write home about, as I am now making crosses among species which are normally considered to be infertile or very hard to cross, at all. The ovary sacs are filling up nicely and pollen sent from Norway is taking with the lily here, so far.

We will see, but that might be the biggest story coming out of the greenhouse – we won’t know for awhile, but I am excited to see such success in pollinating such varying species and hybrid 2N and 4N and even 3N lily flowers.

Do haploid and tetraploid chromosomes go through some kind of sea change when exposed to earth energies?

Does the seed germination chamber force allow for the taking of pollen which normally would not take under other circumstances?

Can fertility be increased along with the drought-tolerant abilities we see already?

Thanks very much for the introduction to this. More soon, I need to get back to work.

View all posts by patchmac →

Subtle Energy on the Farm
A Wee Introduction to Geopathic Stress